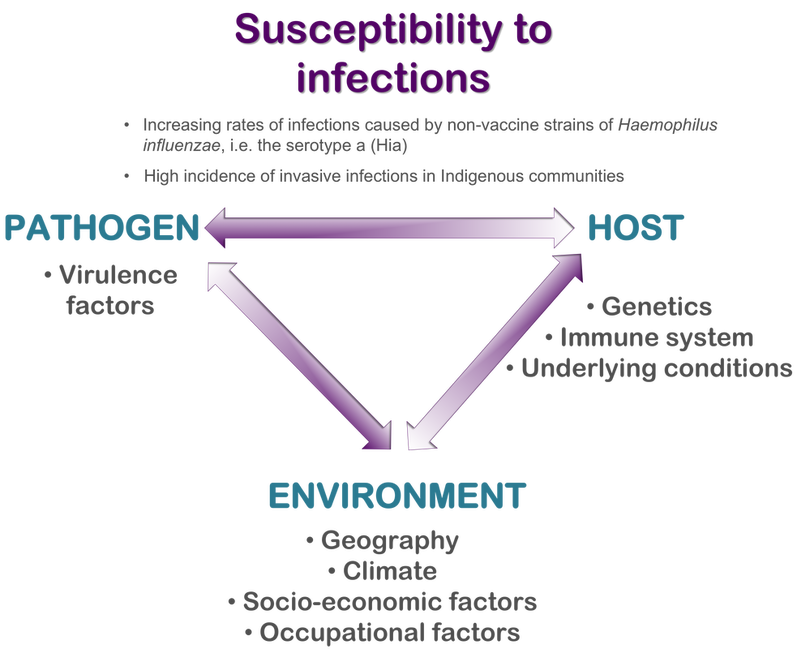 ​Paediatric immunization with a conjugate vaccine

​Epidemiology of infections caused by encapsulated bacteria in Northern Ontario

​Immunoepidemiology of infections caused by encapsulated bacteria in Northern Ontario

Modern vaccines against Haemophilus influenzae type b (Hib) and Streptococcus pneumoniae have dramatically reduced the incidence of invasive diseases caused by these pathogens. However, during the last decade, alarming trends towards an increased prevalence of infections caused by non-vaccine serotypes of H. influenzae and S. pneumoniae have been noticed in many countries of the world. Moreover, the effectiveness of the vaccination significantly varies across different populations.
​
There are data on increased incidence rates of invasive infections caused by H. influenzae and S. pneumoniae in indigenous communities in Canada. We have recently found a high incidence of  invasive H. influenzae type a (Hia) disease in Northwestern Ontario; clinical and demographic analyses have indicated that First Nations children aged <5 years and adults with predisposing medical conditions are most affected by invasive H. influenzae disease. It is important to understand what specific biological and/or environmental factors are responsible for an increased susceptibility of First Nations to severe infections caused by Hia. Such studies will be critical for prevention of invasive bacterial disease in this population. Our current research focuses on immunological mechanisms of defense against Hia in individuals of different age, ethnicity, and presenting with various medical conditions that can compromise the immune system. In collaboration with the National Microbiology Laboratory, National Research Council of Canada, and the Arctic Investigation Program of the US Centers of Disease Control and Prevention, we work towards the development of a new vaccine to prevent Hia disease in North American indigenous people.

This study is funded by a Canadian Immunization Research Network (CIRN) grant.  Dr. Ulanova is a Principal Investigator. The project involves collaboration with several universities and research centers across Canada.
​

Patients with severe chronic kidney disease (CKD) are immunocompromised and known to have an increased risk of pneumococcal infection, i.e. invasive pneumococcal disease and pneumonia. The effect of currently used 23-valent pneumococcal polysaccharide vaccine (PPV23) in these patients is suboptimal because of their immune dysfunction. The second generation pneumococcal vaccines (polysaccharide-protein conjugate) have superior immunogenicity and show protective effect in some immunocompromised adult individuals.
​
We conduct Clinical Trial (registration number NCT02370069) to test whether previous immunization with PPV23 affects the immune response of CKD patients to PCV13 (Prevnar 13). We immunize two groups of adult severe CKD patients undergoing haemodialysis in Thunder Bay Regional Health Sciences Centre with one dose of PCV13 and assess their immunological response, vaccine safety, and longevity of protection. The first group consists of patients without history of pneumococcal vaccination and the second group includes patients who had previously been immunized with PPV23. Immune response to immunization is assessed via the following analyses: 1) the levels of serum anti-capsular polysaccharide IgG, IgA, and IgM against individual pneumococcal serotypes included into PCV13 by ELISA; 2) in vitro functional antibody activity against individual pneumococcal serotypes by a standardized multiplexed opsonophagocytic killing assay (OPA); 3) the numbers of total IgG and antigen-specific B-memory cells using ELISPOT. The anticipated results will provide rationale for the optimal immunization strategy to prevent pneumococcal infection in a high risk population, i.e. in patients with severe CKD.